2020 is about to end and I think everyone would agree it has been an interesting year. Of course, the obvious impact of the COVID-19 pandemic made it at times difficult for the European weighing industry. Also CECIP was impacted in several ways such as being forced to organise our General Assembly for the first time, successfully I should say, as online meeting. Despite the difficulties, I’m glad to see that the CECIP work has continued relatively smoothly due to the flexibility and efforts from all members. We carried on with our work by providing input the initiatives from the European Commission, OIML and WELMEC. Moreover, it created new opportunities to bring together various stakeholders to discuss the important topics of the future during two webinars. Our plan is to continue with these types of events to keep the discussions going.

For CECIP the year was also special because of a number of personal changes. In 2020 we appointed new Presidents of the International Cooperation Group (ICG) and Business & Trade Group (BTG) and I started in my role as CECIP President. Luckily, we are in a luxurious position of taking over a well-run CECIP and working groups from our predecessors. I would like to thanks once more Urs Widmer, Richard Herbert and Roland Nater for their invaluable contributions to CECIP.

For the future, I’m confident the ICG President Luis Cachón and new BTG President Juan Román will lead these groups to new successes with their own ideas and energy. There are already some exciting plans for the next year. You will hear more details in the coming months and I’m looking forward to working on these new initiatives and to continue with our existing work in 2021.

However, before starting with the work of 2021, I think we all deserve some...
Read More

At the 70th CECIP General Assembly on 5 June Nick Parsons was elected. as new CECIP President. Nick is currently Deputy Chief Sales Officer at Minebea Intec and has extensive experience within the industry. Additionally he was an active member of the UK and Irish weighing federation and SMA in the US. All this made him an excellent candidate for this position.

The handover took place during an online meeting and Nick Parsons’ new role is effective immediately. In his speech Nick Parsons mentioned that he was glad Urs Widmer left him CECIP in the position it is currently in. “First of all, I would like to thank Urs for his passion and commitment to CECIP over the last six years. Thanks to his leadership, the activities of CECIP were brought to the next level. I hope to continue the great work started by Urs during my term, including CECIP’s vision for the European Weighing industry by 2030 and our relationships with the various authorities. I am looking forward to the continued cooperation with the CECIP members, the authorities and our international co-operation partners.”

The COVID-19 pandemic has a significant negative impact on the European weighing industry. Although the size of the impact is still uncertain, it is clear that the industry faces major economic problems due to disruptions in supply chains, production and providing services. CECIP, as representative of the weighing industry in Europe, welcomes the wide-range of measures already introduced by Member States and calls on the EU and Member States to continue with new actions. CECIP believes actions should be taken to focus, at least, on the following points:

CECIP Vision 2030: How the weighing industry should look in the next 10 years

The European weighing industry is constantly changing and it is important that with these changes coming the industry remains competitive, consumers are protected and innovations are introduced. Therefore, the right decisions need to be made to ensure all this in the next decade. In the new CECIP Vision 2030, CECIP presents its vision for the future of the European weighing industry and describes what should change, established and implemented in order to reach the industry´s full potential. Improvements are possible on aspects that will benefit users, society and the weighing industry. In five chapters the main elements are presented by CECIP, these are:

This vision serves as internal guidelines on the main CECIP priorities for the coming years and will be presented at different occasions. The full CECIP Vision 2030 can be found here. 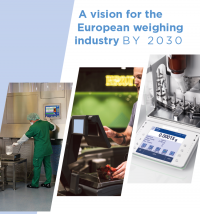 On Thursday 21 November CECIP will present its Vision 2030 during a dinner event in Brussels. At the event representatives from the European Commission, Member States and CECIP will present their view on the European weighing industry in 2030. Participants will join the discussions on several aspects of the CECIP Vision 2030 such as harmonisation, market surveillance and digitalisation. Speakers at the dinner include Mr Pettinelli (Director DG Grow European Commission), CECIP President Urs Widmer, CECIP Board member and managing partner of Espera Werke Marcus Korthäuer.

The dinner will take place at Club Royals des Guides in Brussels and starts at 18.45. All stakeholders and CECIP members are invited and can register via the following link: cecipvision2030.eventbrite.com

The fragmented legislation is a major problem for the weighing industry. CECIP carried out a survey amongst its members concluding that 50% of the companies in the European weighing industry don´t carry out reverifications abroad and the main reason is fragmented legislation. Moreover, for the companies that carry out reverifications already, the total costs of the differences in legislation are estimated over 6 million euro per year. For the weighing industry this is a large amount of resources that cannot be invested in other areas such as R&D.